Compression is the process of reduction in bit number required for representing a data. At the database level, SQL server supports a new feature named as Backup Compression. The feature enables its user to create a backup file, whose size is smaller than the original backup file size. SQL server backup compressed file represents entire data of database in a compact form. Database in SQL server increases constantly and hence, users require a solution by which they can compress the backup file of SQL server.

Advantages of Compressing a Backup File in SQL Server

Reduces the Original File Size: The data of backup file is being processed in such a way that the size of compressed file is less than the original one. Therefore, such compressed files require less amount of storage space to archive the file.

Ease in Accumulating Database: After compressing large database backup file, it will be easy for computer users to store large amount of data at one place without any trouble.

Minimizes the Resource Utilization: By compressing backup file, one can minimize the consumption of resource i.e. minimize CPU utilization. Hence, this may increase the performance and speed of the server.

The successful compression is dependent upon two factors and they are described below:

2. If the source backup file is compressed/encrypted and user is performing compression on such file, then the compression will not be of so much benefit.

Another way of performing compression is by using settings of SQL server database. For doing so, perform right-click from your mouse on the instance name and open the Server Properties windows on your machine. From the properties screen, select Database Settings page and set the settings as per mentioned in following snapshot: 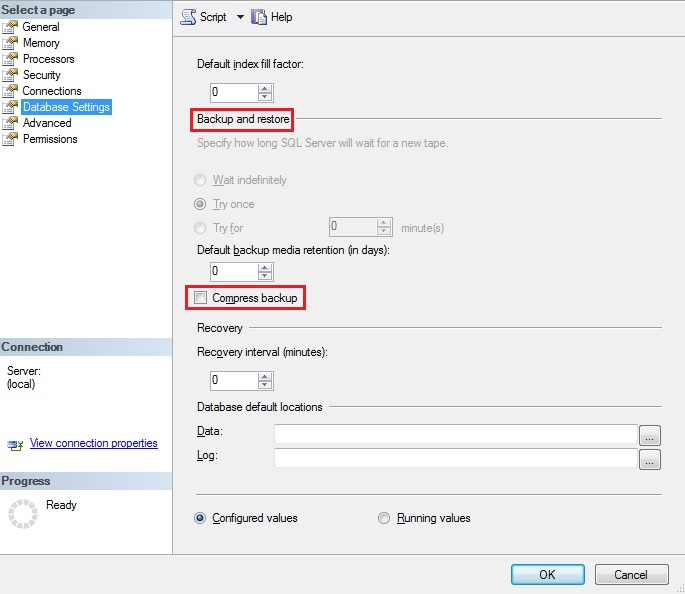 In terms of performance and speed of SQL server, SQL server backup compression can provide users an enormous benefit. These benefits are thoroughly dependent on the database on which compression is to be performed. The main thing to take in consideration is to become aware of the advantages that are obtained from compression technique. Compression provides an ease to users to manage large amount of data with less storage space. Moreover, it is best concept for reducing the backup file size and hence, require less storage space to store and manage backup files of the server.

Know How to do MS SQL Server Disaster Recovery Planning

View all of Andrew Jackson's posts.